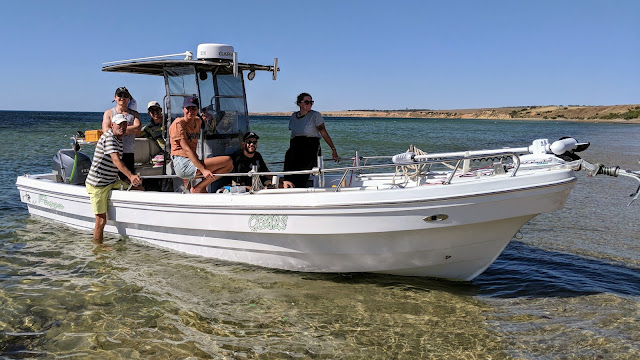 Yesterday the AusOcean crew made its second trip to Windara Reef, the indigenous name which has been given to the shellfish reef being restored near Ardrossan, South Australia. Our primary objective was to find two mooring blocks that we could use for mooring the AusOcean "rig". The latter is the surface component of an underwater sensor network that we'll be deploying in the coming months.

Two University of Adelaide marine biology student divers, Catherine and Erin, assisted underwater by Alan, were given the task of finding the mooring blocks, 700-kg "control blocks" deployed during the reef construction process. The task was made more challenging by windy conditions above water and poor visibility underwater - less than 10m. Nevertheless the team succeeded in finding not one, but two of the blocks about 16m apart.

We then shackled the rig's mooring line to each block, two shackles per block (with the rig itself left unattached for now). This is because AusOcean has developed a continuous mooring line system requiring two attachment points. This ensures that the rig can maintain its orientation with respect to shore, and slide along the surface in accordance with water movements, rather than resisting such forces.  It is somewhat analogous to the tactic of a yacht "lying ahull" during heavy weather, allowing the vessel to drift rather than fighting the conditions. This is in contrast to conventional moorings, which generate huge tensional forces due to the tugging of the mooring line. I will write more about this in a future blog post.

It was 2:30pm by the time we had the mooring line attached and marked with a buoy. Surface conditions were starting to deteriorate, so we decided it was time to head back to shore. The deployment of the rig would wait for another day.

PS A special thanks for James Well local Lindsay for providing his boat for the day.