See our blog Evolution of low-cost underwater camera technology for information on our new camera design.
One of AusOcean's goals is to dramatically lower the cost of ocean monitoring. One way we're doing this is by using low-cost consumer electronics and another way is by getting creative with our use of low-cost materials.

One of our top priorities is continuous underwater video monitoring. Continuous monitoring rules out the use of cameras that store video locally, i.e., to an SD card, such as a GoPro. Instead, we require so-called IP cameras, which can stream video over networks. Such cameras are becoming common for surveillance applications, but good ones typically cost at least US $200 (usually more), and underwater housings typically add hundreds or even thousands of dollars to the cost.

We decided to build our own by combining a Raspberry Pi 3 (US $35) with a Pi Camera (US $30) (top photo). The Pi 3 provides Ethernet connectivity and the compute power for the Pi Camera. In fact, a Pi Zero, which costs less than half as much as a Pi 3, is more than up to the task of processing video, but lacks built-in Ethernet connectivity. Why Ethernet? Because our cameras are going under water where WiFi does not work! Also, we need to supply power to the camera. By using passive Power over Ethernet (PoE), we combine a 24V DC power supply with data over a single Cat 6 waterproof cable. The final hardware component is a (US$5) voltage regulator, which steps the 24V DC down to 5V DC to power the electronics. The electronics sits on a custom semi-cylindrical mount that we 3D printed.

The housing is made from 90mm PVC tube and slide-on caps available from any hardware store, glued on with PVC glue. The viewing window is made from a 32mm (1 ¼") diameter hole covered with a 60mm acrylic square, glued on with acrylic glue (shown below). The Ethernet cable is permanently glued ("potted") to the other end using JB Weld and Sikaflex 291 (not shown). 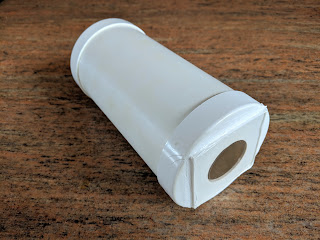 On the software side we developed revid which takes raspivid output from the Pi Camera and streams it to the cloud or YouTube.

Based on earlier testing, we expect this PVC housing can easily withstand pressures of 3 atmospheres (20m depth), but we only plan to deploy to a depth of 10m. We stress tested the housing by towing it behind a boat at 7 knots for half an hour, and there was no sign of water ingress.