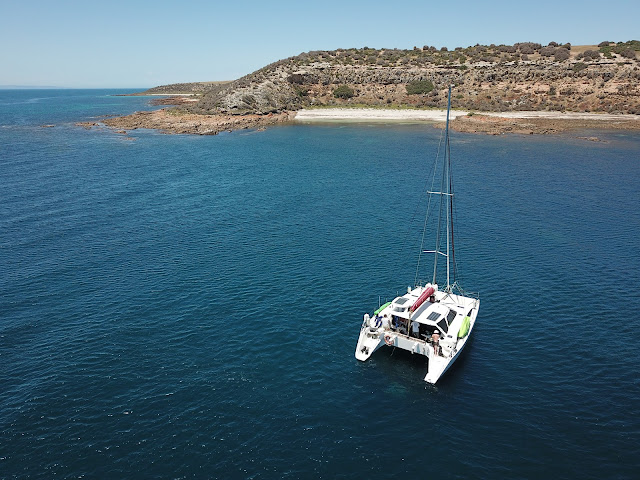 AusOcean's mission is to help our oceans through the use of technology. Our full name is the Australian Ocean Laboratory, but if you thought that an organisation with "laboratory" in its name was for boffins in white lab coats, you would be mistaken.  While it is true that we develop a lot of our technology in mundane offices, our true laboratory is the ocean. With any leading edge (dare I say "bleeding edge"?) technology, there is no substitute for working in the field, and this is particularly true of the ocean. As any boatie knows, the marine environment is tough on equipment, so nothing beats real-world testing. And even better if it serves an important purpose. That purpose was to undertake marine life surveys of the North Coast of Kangaroo Island and Smith Bay in particular.

Most people don't realise that Southern Australia's marine environment, increasingly referred to as the Great Southern Reef, is just as diverse as that other Australian marine marvel, the Great Barrier Reef (GBR). However unlike its tropical counterpart, over 90% of species found on the Great Southern Reef are found nowhere else in the world, and there is still a great deal that we don't know about the region. Only recently 400 new species were discovered in the deep waters of the Great Australian Bight, which begs the question, how many more species await discovery.

Kangaroo Island's marine environment is particularly interesting as it encompasses Gulf waters and Southern Ocean waters and areas of confluence between the two. We decided to focus on Smith Bay because it is the site of a proposed seaport and has only been lightly studied to date. We made two week-long trips, both on Arriba, a Lightwave38 sailing catamaran (shown above), one in December and one in February.

Smith Bay lies 6 nautical miles east of Cape Cassini or 9 nautical miles west of North Cape. It is a wide open bay with a mostly rocky coastline. The bay is renowned on Kangaroo Island for its great fishing, but for passing yachties, it is quite easy to ignore. The large abalone farm ashore is not particularly attractive and nearby Boxing Bay, Emu Bay (to the east) and Dashwood Bay (to the west) are all superior anchorages.

Appearances can be very deceptive though. Underwater Smith Bay is a marine paradise, with a great diversity of benthic environments, namely rocky reef, dense seagrass and mixed sand/rock/seagrass. This variety in habitats in turn fosters great species diversity.

We conducted 20 dives of which 17 were marine life surveys and 14 were in Smith Bay. We adhered to the Reef Life Survey (RLS) method developed by researchers at the University of Tasmania. RLS is a non-profit, citizen science program in which scuba divers undertake standardised surveys of reef biodiversity on rocky and coral reefs around the world. By following the RLS standard, other dive teams can compare our findings with theirs in years to come. In a nutshell, divers working as a pair, follow a 50m transect along the seafloor, counting vertebrates in one direction and invertebrates in the other direction, recording everything as they go both in writing and in photos. All of the data we collected will be freely available on the RLS website.

One notable observation were two Western Blue Gropers, which are listed as Vulnerable on the IUCN red list of threatened species. 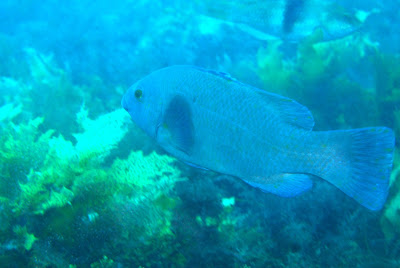 Not all observations were along transects though. The discovery of giant temperate coral of the species Plesiastrea versipora really stole the show. One specimen (shown below) was a whopping 6m in circumference and 2m tall. 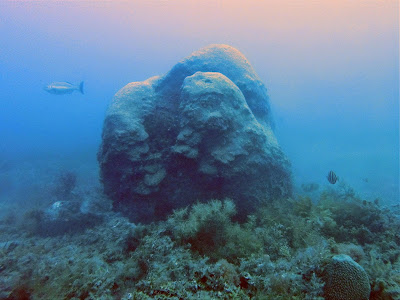 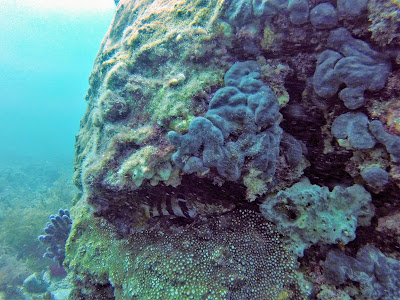 Approaching this marvel from underwater is breathtaking, as unlike typical tropical coral reefs which grow in horizontal sheets, this beauty arose suddenly like a giant head from the seafloor. It is worth nothing that P. verispora is a slow-growing species, which means that this particular coral community is several hundred years old. While not yet threatened globally, this species has become increasingly rare in Southern Australian waters and, like a giant heritage tree on land, deserves our protection. For now we need to keep the exact location secret until protective measures can be put in place.

Now the hard work of collating and analyzing our observations begins in earnest, which we will publish in a report to be made available from the AusOcean website (www.ausocean.org).