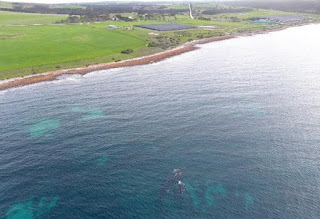 David Connell, a Smith Bay local has had the privilege of watching the southern right whales frolic, nurse and give birth in Smith Bay for over a decade. Over time, the visiting frequency and numbers has been on the increase. Connell said his initial encounter was a solitary mother sheltering in the bay with her calf and over the years the numbers grew as he became accustomed to when to expect them and where to keep a look out.

"Smith Bay has an ironstone reef that runs parallel to its shores, I believe the mothers feel this is great protection for their young. The bay has minimal sand so even in onshore wind days water clarity is very good" he said. 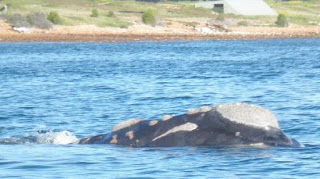 You might be interested to know that the right whale got it's name because it was the "right" whale to hunt - it would move slowly, float after being killed and provide large amounts of valuable product, mainly oil for illumination and lubrication. Commercial whaling in Australia took out 75% of the southern right whale population in 10 years. Prior to whaling, 100,000 of these beautiful animals inhabited the waters of southern Australia. Today, there are 12,000, however there numbers are growing, making sightings across the Great Australian Bight all the more common. South Australia has some of the most optimal whale watching locations. The first sightings of the majestic southern right whales in KI waters often coincide with Mothers' day where these gentle giants make their journey from the Antarctic waters to breed and calve.

Southern right whales aren't the only cetaceans that frequent Smith Bay and the wider north coast of KI. Kangaroo Island / Victor Harbor (KIVH) Dolphin Watch is a community volunteer project who, in partnership with Whale and Dolphin Conservation have been monitoring dolphin populations on Kangaroo Island since 2005 and Victor Harbor since 2011. Through unobtrusive monitoring they minimise impacts and behavioural changes, collecting vital baseline data to globally inform practise. Scientists and dedicated volunteers of all ages collaborate on effective “Citizen Science” in surveys on Eco Tourism vessels: Kangaroo Island Marine Adventures and The Big Duck Boat Tours, Victor Harbor contributing a staggering number of hours over 14 years. Both images and video footage are collected, and are utilised to identify individual dolphins by distinctive dorsal fins and body markings. Vital data is recorded on movements and habitats, creating a sustainable, longitudinal study of international significance. 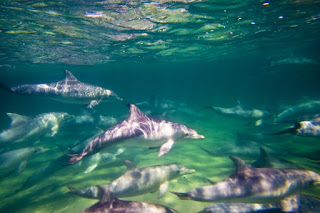 KIVH dolphin watch have monitored dolphin movements extensively on the north coast, which has uncovered the importance of habitat between North Cape and Dashwood Bay - which lay either side of Smith Bay. The AusOcean crew witnessed this first hand on numerous occasions as dolphins would often play at the bow of the boat as the crew were sailing between locations on the north coast. Whales and dolphins spend most of their time under the surface of the water communicating through sound which makes visual monitoring methods on the surface ineffective. This is where acoustic monitoring can provide important insights into behaviours, movements and population dynamics of these incredible creatures.