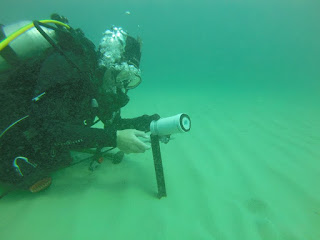 AusOcean is a strong proponent of “production-based testing”; that is, to favour discovery of failure modes during in-situ deployments, rather than during a dedicated testing period. Production-based testing comes with greater risk, so it ends up being about finding a trade-off. If we’re okay with the increased risks, we can avoid resource-intensive testing procedures. Furthermore, it is difficult to emulate the natural conditions you’d find in the intended deployment environment, which, in our case, is the ocean!

We’re slowly getting to the bottom of our failures, the causes of which have been mostly obvious. However, when it comes to our underwater camera housings, it seems apparent that production-based testing may not be the right approach. The failures have been inconsistent; sometimes the housings work for months at a time and others, for a day or two. Diagnosing failures is particularly difficult, due mostly to accessibility factors working in the marine environment. Often, It’s not entirely clear whether the failures have resulted from the housing design, fabrication, mooring tangling or anchor dragging. Coupled with long equipment recovery lead times, we are often left with a combination of multiple failures and no clear idea on their order or cause.

Live streaming video is of particular importance to us; it’s useful from both a public engagement, and scientific standpoint. We hope to showcase video of amazing underwater environments to the world through our open source software. Behind the scenes we analyse footage using clever machine learning techniques to perform automated species identification and monitor important environmental parameters such as turbidity. It was concluded that we needed a way to diagnose our camera housing failures in a controlled setting. This would firstly, confirm the effectiveness of the current design, and secondly, provide a standardised procedure for testing camera housings prior to deployment. To complicate things, we’d have to maintain 10+m of water pressure over week-long periods. Additionally, we’d need to implement a design that allows the underwater housing cable to extrude out of the vessel. Here the low cost self regulating pressure testing vessel concept was conceived. 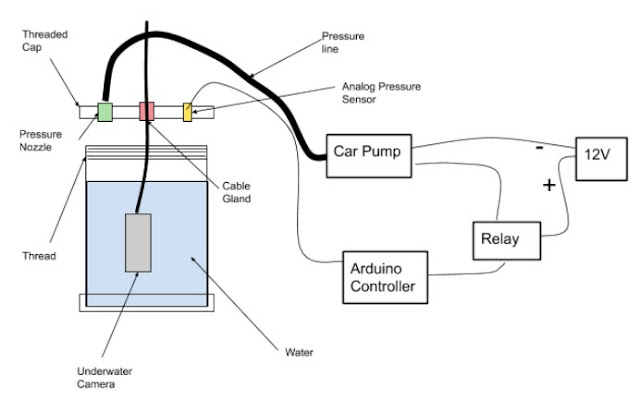 This image was the first conceptualisation of the “self regulating pressure vessel”. It shows a PVC pipe, capped on the bottom and threaded on top. The threaded cap would accommodate 3 things; firstly, a standard tire nozzle to allow for connection of a pump, a cable gland (1 at minimum but could do more for multiple tests simultaneously) to allow cabling to pass through, and a waterproof analog pressure sensor, so we can monitor pressure and trigger the pump when required. There is an arduino controller of some sort, with input from the pressure sensor and output to a relay for pump control. Most car tire pumps and relays with the required current rating work with 12V, so we’d probably have a 12V source and regulate if necessary for the controller.

After further development, a more refined solution for the electronics was produced, as shown below: 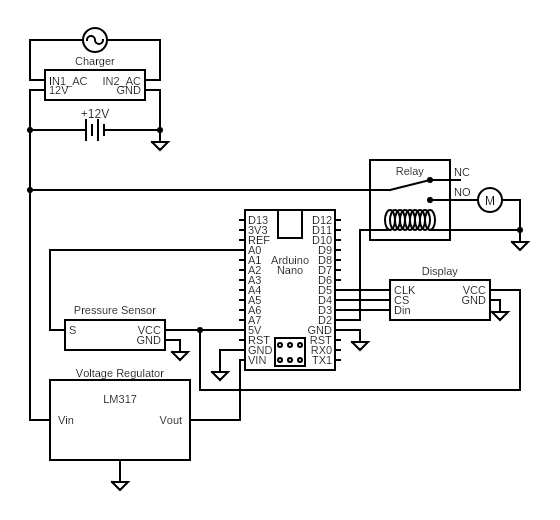 In its entirety (besides the battery, charger and tire pump) the final system costs about $60 AUD in parts. If you use enough teflon tape around the PVC thread, pressure sensor and glands, a pretty decent seal can be achieved; the pump need only run for 5 seconds every few minutes (assuming there’s about ⅕ of air in the vessel). To date, we have performed testing on 6 different specimens. These tests have included PVC bonding, cable potting and viewing window gluing methods. This has led to discoveries that have helped us determine the best fabrication method for our underwater camera housings. Now that we have this sorted, we can finally concentrate on getting our rigs back on the water! 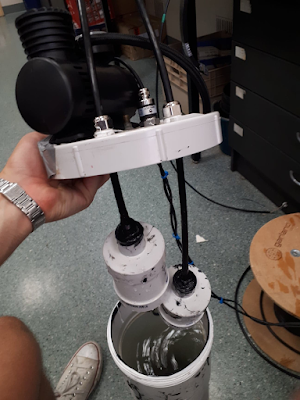 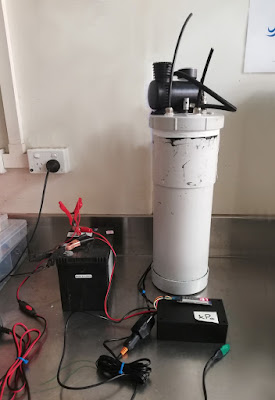