How the sounds of the ocean help oysters select their home

Restoring the lost oyster reefs of South Australia
Prior to European settlement much of Australia's coastline was fringed with oyster reefs (also known as shellfish reefs). These reefs were dominated by the native Ostrea angasi flat oyster and were common in South Australia’s gulfs and bays spreading across 1500km of coastline.  Dr Heidi Alleway and Professor Sean Connell from the University of Adelaide dug through historical records to uncover South Australia's rich, but dark, oyster history. As Europeans flocked to Australia's coastlines they brought destructive fishing practices utilising metal dredges as an effective method of scouring the seafloor for oyster shell. Nothing was exempt; the beautifully complex and biodiverse seafloor was annihilated leaving little behind. These native oyster reefs are now considered functionally extinct with one healthy reef remaining in Tasmania. Thousands of years of complexity, removed in 100 years. Where do you even begin?

Well, it's not all dark. Effective collaboration between The Nature Conservancy, government and universities has put South Australia on the map for oyster reef restoration. Oyster restoration projects provide an opportunity to restore the ecological foundations of marine ecosystems because oysters are unsung ecological superheroes, but like trees on land. When oysters cement together, their aggregations form complex habitat creating homes for a great diversity of invertebrates, boosting the density and diversity of the little animals that feed the broader coastal food web. But that’s not all, oysters feed by filtering particles from the water, in doing so they improve water quality and encourage neighboring seagrass to grow. A single oyster filters 150 litres of water a day. Now, can you imagine the water filtration capacity of an entire reef! Nature really does do it best.

South Australia is home to one very large (20 ha to be exact) oyster restoration project: Windara reef, located in the coastal waters of Gulf St Vincent near Ardrossan. It is the largest of its kind in the Southern Hemisphere, made up of 18,000 tonnes of locally sourced limestone providing the initial foundations for reef regeneration. By replacing the hard substrate that once existed in the Gulf, oyster populations can begin to reestablish and thrive. Following the successful construction of Windara reef, a second oyster reef has just been built at Glenelg along Adelaide’s metropolitan coastline, covering the an area the size of Adelaide oval.
Oysters don’t have ears but they can still “hear” their surroundings

The ocean is a noisy place with sounds produced by both biological (fish vocalisations, shrimp) and physical processes (waves, currents). If you've ever snorkeled on a reef you might be familiar with the loud crackling sound made by the claws of the loudest marine invertebrate: snapping shrimp. These clicks, along with the rest of the noises on a reef, make up the habitat "soundscape" and play an important role in the selection process of many larval organisms (including oysters) forever home.

Listen to the sound of snapping shrimp on a temperate rocky reef system. This recording was taken by PhD student Brittany Williams who is researching oyster reef soundscapes at The University of Adelaide.

Oyster larvae float around in the water column waiting for the perfect opportunity to settle and grow into an adult. Although oysters don't have ears, they have clever abilities which enable them to sense or "hear" their environmental surroundings. Oysters perceive the vibrations created by sound waves using the statocyst: the organ that registers movement and vibration. This process is important because shellfish reef ecosystems and efforts to restore them rely on the inlux and settlement of key reef building organisms such as oysters.

Since its inception AusOcean has been fortunate enough to work at Windara reef and Glenelg, diving and testing out new and exciting tech. Our newest venture involves developing and deploying low-cost speaker technology for continuous immersion onto restored reef substrata. Could amplifying the soundscape of a healthy reef in a degraded or "quiet" habitat influence oyster settlement patterns? We’re hoping our tech can help answer this question. 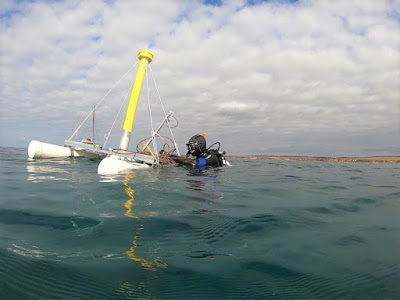 Our low-cost speakers are made from PVC pipe and commercial off-the-shelf electronics costing around $35. A challenge of long-term speaker deployment is limited battery life. We resolve this issue by connecting the speakers to our sea surface platform or "rig" which facilitates long term, continuous immersion and for a fraction of the cost. We’re also developing a self-contained speaker unit (SCUSU) for deployments over larger spatial areas in partnership with researchers at The University of Adelaide.

The results from our first underwater speaker deployments at Windara reef suggest that oyster larvae have the ability to respond to sounds indicative of optimal settlement sites. By manipulating the soundscape in degraded habitats we can influence oyster settlement patters, facilitating the formation of reef habitat. In other words, we can help baby oysters follow the sounds of a reef to select their home. Formation of this complex habitat is critical as restored oyster reefs build the resilience of marine systems, future proofing our coastal ecosystems. We have recently replicated this set-up at Glenelg which will hopefully answer some important questions about how best to restore these valuable systems. 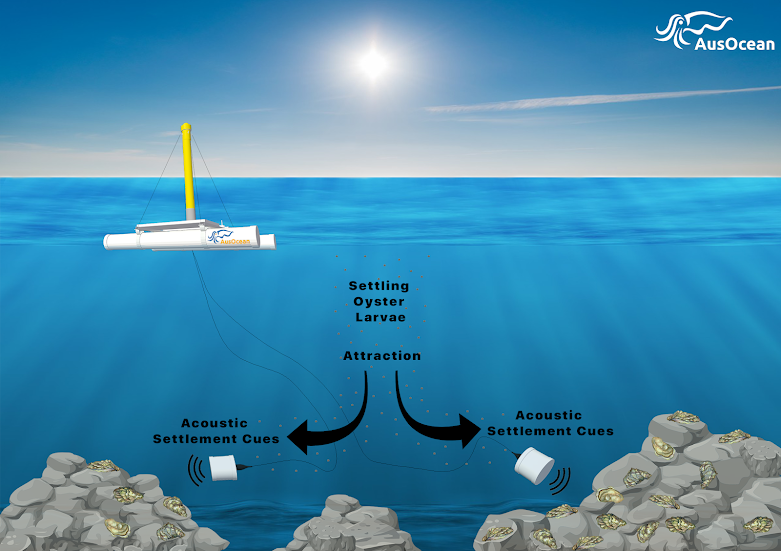 Amplified acoustic settlement cues attract oyster larvae to reef substrate.
Novel techniques are required to accelerate oyster reef restoration outcomes. By coupling low-cost engineering solutions with innovative approaches to science, we can tackle conservation challenges and work towards a more healthy, vibrant and biodiverse marine environment for South Australia. We feel very fortunate to be involved in these amazing, multi-generational projects and look forward to watching them evolve over the years. 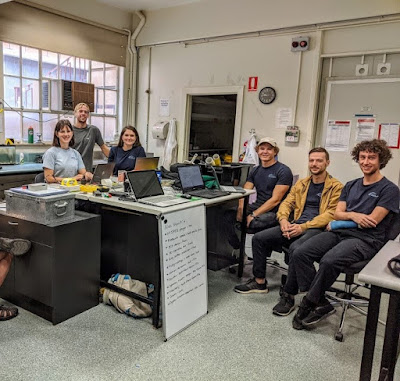