Beneath the waves at South Australia's giant cuttlefish marine spectacle 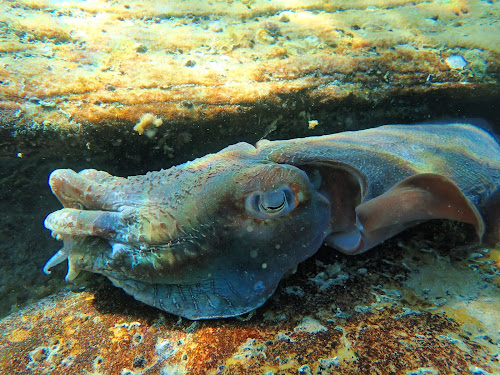 📸: Saxon Nelson-Milton
Each year, one of nature's most bizarre marine orgies plays out along an 8km stretch of rocky reef at Point Lowly in the Upper Spencer Gulf region of South Australia. It's hard to imagine just metres from the shore an iridescent mass of over 200,000 majestic and highly intelligent Australian giant cuttlefish (Sepia apama) congregate to mate and then die. These giants are the largest of the world’s 120-odd cuttlefish belonging to the cephalopod group, which includes all squid and octopuses. Discovered by divers in the late 1990's, this location is the only place in the world cuttlefish are known to aggregate in such large numbers. This unique gathering every May-August is linked to the optimal rocky reef habitat which provides suitable crevices and caves which protect their eggs.
Mating season is a vicious and violent affair with males outnumbering the females on average 4 to one, making it a high stakes business. Mating occurs head to head, with the males outstretched tentacles engulfing the females head appearing as if he is about to consume her. Sperm is squirted into the females mouth which she fertilises internally before depositing the small lemon-shaped leathery white eggs in the rocky crevices. These fierce copulation sessions can last up to half an hour completely unphased by your presence.
The larger males show dominance by rapidly altering their skin colour, displaying a striking pulsating zebra like pattern in an attempt to win breeding rights. Being a smaller male has its perks too. They mimic the females colouration and behaviour as a disguise, enabling them to sneak past the larger males whilst they are busy warding off other male competition. Cross dressing at its finest.
The secret to their striking colour changing abilities lies in their skin, where millions of tiny pigment-filled cells called chromatophores are located. Muscles in these cells stretch to reveal the colors, and it's a part of why they can rapidly alter their skin colour and shape to mimic the pattern and texture of rock shelves and algal fronds. Chromatophores can be likened to pixels on a TV or computer screen, broadcasting the cuttlefish's inner thoughts. Whether it's courting, hunting or camouflaging, changes in skin cell pigments are controlled through direct action of their brain. It has been suggested that observing the cuttlefish skin is almost like reading its mind. If that's not cool enough, cuttlefish have three hearts, a doughnut-shaped brain, blue blood, a beak, eight arms and two (retractable) feeding tentacles. The closest thing to an alien on earth.
Cuttlefish have been described as the 'rock stars of the sea' due to their active sex life, short life spans and impressive colouration. However, their short life span (12-24 months) and single spawning life history makes them particularly vulnerable to decline. Each breeding season is critical since the number of surviving eggs directly impacts the viability of the following year's population. After a population crash in 2013 a cephalopod fishing ban was introduced to the entire Northern Spencer Gulf. While no direct link between fishing pressure and the declining numbers have been drawn, populations have been rebounding since 2013, with exceptional numbers observed this year. Other influences that may have impacted numbers include fluctuating temperatures, salinity and pollution. Cuttlefish lovers are concerned now that the fishing ban in the Upper Spencer Gulf has been lifted, however, the permanent closure at the breeding site will remain.
The cuttlefish aggregation is truly one the world's most exciting marine spectacles. Braving the chilly waters is a worthwhile endeavour to get up close and personal with these mystifying creatures.
We are the Australian Ocean Lab (AusOcean), an environmental not-for-profit organisation that supports open source practices. Our mission is to help our oceans through technology. Open source approaches to tackling environmental issues means embracing collaborative tools and workflows which enables processes and progress to be fully transparent. A critical aspect of working open is sharing data not only with your immediate team but with others across the world who can learn, adapt and contribute to collective research. By contributing to, and supporting open practices within the scientific community, we can accelerate research and encourage transparency. All tech assembly guides can be found at https://www.ausocean.org/info.
Follow us on Instagram, Facebook or Twitter for more photos, videos and stories. 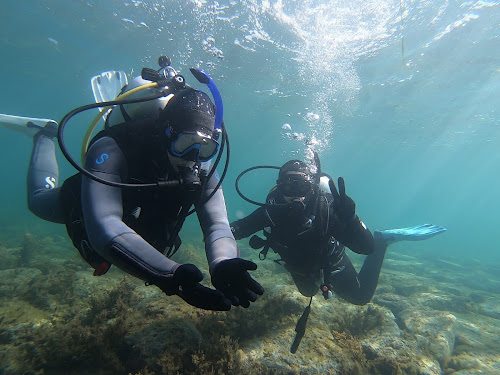