The hidden inhabitants of marine plastic 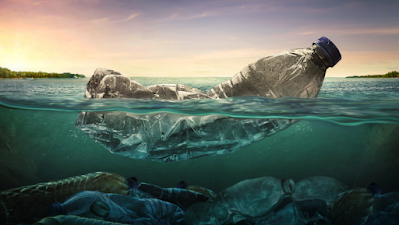 Plastic was only invented above a century ago in 1907. The first type of plastic created was Bakelite, which was a substitute for shellac, a popular electric insulator. The plastic production in 1950 was 2 million tonnes per year. In the year 2015, the global plastic production reached 381 million tonnes. Plastic gained popularity as it’s cheap, versatile, durable, flexible, low in weight and is sanitary, which gave it a competitive edge over any other traditional materials or substitutes. Now, plastic has become one of the most indispensable creations by man with plastic products being used in various industries such as, construction, transportation, electrical, textiles, consumer products, agriculture, healthcare and packaging.

Global plastic production by industry from 1950-2015. The average time plastics are used within each industry, before they’re discarded is also shown on the right. Curated by Jason Treat and Ryan Williams of National Geographic, Source: Roland Geyer.

However, due to mismanagement and low recycling efforts, plastic waste often ends up in our oceans. It is estimated that 8 million pieces of plastic enter our oceans on a daily basis. Plastic has now been found in all the global oceans, including the Arctic and the Antarctic. There has been an increase in marine plastic research, from across the world in the last few years. Yet, marine plastic remains a relatively new area of research with so many unknowns. We, at the University of Adelaide, have a small group of PhD researchers, under the supervision of Professor Bronwyn Gillanders, tackling unanswered questions on marine plastic. My research focuses on marine microbes that colonize oceanic plastic.

What are marine microbes and what is the Plastisphere? 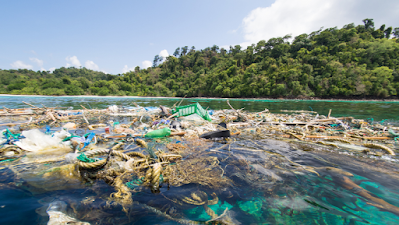 What is my research investigating?

My research investigates the plastisphere microbes in South Australian waters. The plastisphere microbial research is important as in can influence degrading and breakdown of plastic. The plastisphere can also facilitate different metals being absorbed by plastic. In different parts of the world, harmful microbes such as pathogens were found to have “hitch hiked rides” on marine plastic. If this happens in South Australian waters, remains a question. To answer these unknowns, I am investigating the different types of marine microbes that colonize various types of plastic, in South Australian waters. I have deployed plastic in the Cruising Yacht Club of South Australia and will be deploying plastic along the South Australian coast to investigate what microbial species will be found living on plastic.
While we at the University of Adelaide are committed to contributing to marine plastic research, please do you own little bit to help reduce plastic pollution and be mindful with your plastic footprint. Always reduce, reuse and recycle while encouraging others to do the same!
By PhD student from the University of Adelaide Vinuri Silva. For more updates on Vinuri's research follow her on twitter @SilvaVinuri .
AusOcean is a not-for-profit ocean research organisation that supports open source practices. Open source approaches to tackling environmental issues means embracing collaborative tools and workflows which enables processes and progress to be fully transparent. A critical aspect of working open is sharing data not only with your immediate team but with others across the world who can learn, adapt and contribute to collective research. By contributing to, and supporting open practices within the scientific community, we can accelerate research and encourage transparency. All tech assembly guides can be found at https://www.ausocean.org/technology
Follow us on Instagram, Facebook or Twitter for more photos, videos and stories
bacteria fungi microbes microplastics phytoplankton plastics platisphere research South Australia
Location: South Australia, Australia