Australian sea lions are in trouble - here's how you can help

Many South Australian's are unaware that 85% of  Australian sea lions (ASLs) live along the coastlines in South Australia, with the remaining 15% found in Western Australia. As their name suggests, ASLs are found only in Australia and are listed as endangered and declining on the IUCN Red List of Threatened Species. They are also listed as endangered under the Commonwealth Environment Protection and Biodiversity Conservation Act 1999, and are protected in South Australia under the National Parks and Wildlife Act 1972.
ASLs were hunted for their hide and oil in the 18th and 19th centuries before which its range extended as far as the islands in Bass Strait. Today, populations are found between The Pages Islands in South Australia and Houtman Abrolhos off the Western Australian coast. The principal breeding colonies are located at Kangaroo Island and Dangerous Reef, both located in South Australia. Over the past four decades, ASL numbers have fallen by over 60% with recent research indicating the population is much smaller than previously estimated and is declining (Goldsworthy et al. 2021). Numerous factors have been identified to be contributing to the species decline, among these include, deaths caused by bycatch in fisheries, entanglement in marine debris, disease, impacts related to climate change, and human disturbance to breeding sites (including tourism) (Goldsworthy et al. 2009). Of major concern however, is there is no consensus amongst the scientific community as to the root cause of this ongoing decline.

ASLs are an icon of Australia’s Great Southern Reef. As an important top-order predator, the ASL plays a pivotal role in controlling the population of many animals in its ecosystem, making it a keystone species, and an important indicator of overall ocean health. Therefore, improving monitoring efforts to gain a better understanding of the causes of their decline, and to detect new and / or emerging threats and stressors to their populations will help the species recover, and safeguard the unique coastal ecosystems on which ASLs depend. 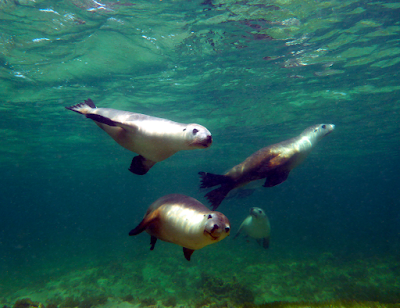 So how can you help?
Sea lions, Life by a Whisker film aims to raise awareness for one of the rarest marine mammals. After the launch of this amazing film, the team at Life by a Whisker have organised a fundraiser to help support the conservation and research of ASLs as "government funding for the continuation of ASL research and conservation continues to be reduced every year, making it harder and harder to implement and action the protections required for a species that so desperately needs our help".
This fundraiser will support the continuation of research and subsequent conservation of the species including but not limited to; population surveys, satellite tracking, habitat evaluation, drone technology to assess body condition, and the assessment of any potential tourism impacts. If you would like to learn more about this research and help support this iconic species head to the Australian sea lion research and conservation fund. Every little bit helps.
Goldsworthy SD, Shaughnessy PD, Mackay AI, Bailleul F, Holman D, Lowther AD, Page B, Waples K, Raudino H, Bryars S, Anderson TA (2021) Assessment of the status and trends in abundance of a coastal pinniped, the Australian sea lion Neophoca cinerea. Endangered Species Research 44: 421-437
Goldsworthy SD, McKenzie J, Shaughnessy PD, McIntosh RR, Page B, Campbell R (2009) An update of the report: Understanding the impediments to the growth of Australian sea lion populations. Report to the Department of the Environment, Water, Heritage and the Arts, . SARDI Research Report series No. 356. https:// pir. sa. gov. au/ __data/assets/pdf_file/0009/231795/No_356_Up
AusOcean is a not-for-profit ocean research organisation that supports open source practices. Open source approaches to tackling environmental issues means embracing collaborative tools and workflows which enables processes and progress to be fully transparent. A critical aspect of working open is sharing data not only with your immediate team but with others across the world who can learn, adapt and contribute to collective research. By contributing to, and supporting open practices within the scientific community, we can accelerate research and encourage transparency. All tech assembly guides can be found at https://www.ausocean.org/technology