Last weekend AusOcean achieved another milestone; we carried out our first "expedition." Admittedly, as expeditions go, it was modest. We were invited to capture 360° video of a shellfish reef restoration project commencing near Ardrossan, South Australia. By road it is about 2 hours from Adelaide however we traveled by boat instead; 3 hours longer, but infinitely more relaxing.

The purpose of this first trip was to capture underwater footage of the area prior to the start of construction. The shellfish being re-introduced is the native Australian oyster, Ostrea angasi. All of southern Australia once had extensive angasi oyster beds but they were almost completely destroyed in the 19th and early 20th centuries. Wild oysters were harvested by dredging the seafloor, destroying the reefs in the process. The top photo shows one of the few remaining natural reefs, at Georges Bay, Tasmania (photo by Chris Gillies). In order to re-establish an oyster reef from scratch it is necessary to provide some hard substrate. At the Ardrosssan site they are experimenting with both limestone and artificial concrete structures.

For some time I've been thinking about a fast and cheap way to capture large amounts of underwater video. Divers, even those on sea scooters, are slow and remotely operated underwater vehicles (RoVs) are expensive. Towing one or more cameras behind a surface vessel, even a kayak, seemed more promising. I was inspired by the humble paravane used for trolling (below). 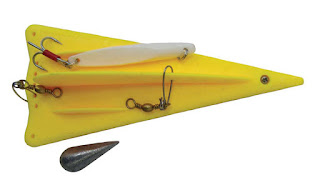 My first prototype was a triangular design, similar to the paravane above, but I soon realized that a catamaran sled design would provide more space for mounting equipment without sacrificing stability. The towable underwater sled was born! 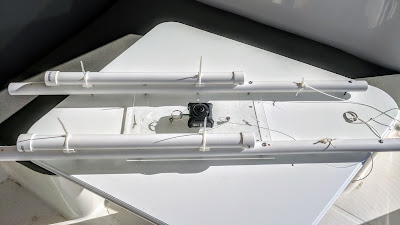 The sled was made with 25mm (1") PVC tubes and an small piece of acrylic sheet, held together with stainless steel M5 nuts & bolts. It cost under $40 in parts and was assembled in under an hour.

Like the paravane, the line is attached some distance from the front and weights at the very front (hidden inside the tubes) help keep the nose down. As a precaution, floatation tubes ensure the sled has positive bouyancy and will therefore float to the surface if the tow line snaps. After experimenting with hand reels, we found that the easiest way to deploy and control the sled was using a heavy-duty fishing rod (used for tuna fishing). We were fishing for video!
The initial results were promising. The sled was very stable and produced smooth footage. It was also easy to adjust the depth by controlling the amount of line let out. We tested it up to speeds of 3 knots, but the best footage was obtained at a leisurely 1 knot (0.5 m/s). We tested two cameras, both mounted face down on the sled (since the goal was to capture the seafloor). The first, a Nikon Keymission 360 did not produce useful footage due to too great a difference in exposure between the front lens (facing down) and the rear lens (facing up). The maximum EV compensation was insufficient for the task. (Next time, we will will mount the Keymission 360 facing forward, as it is intended to be used). The second, a GoPro Hero 4, produced useful footage (1080p/30fps, no filter), which you can see here (skip past the first 2 minutes, during which the sled is diving).

The sled definitely has room for improvement. For example, with 9m depth and only 5m of visibility we had to guess the depth. Some kind of depth indicator would be useful. It could also be calculated from the line angle and line length. Further, the slat which forces the sled to dive is fixed in postion. An adjustable slat, much like those on the front of an aircraft's wing, would provide greater depth control. Ways to attach cameras more quickly and in different positions would be beneficial too.

We plan to return to the site in a few months for a second pass.