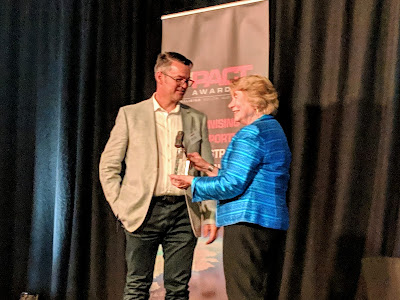 Last night I had the privilege to deliver the keynote to the Impact Awards. These awards recognise businesses having an exceptional impact in South Australia. The photo shows judge (and my good friend) Dr Jana Matthews giving an award to Resonate.

One of the themes of my talk was moonshots and "moonshot thinking". Moonshot thinking is thinking about solutions to problems that are 10x better, not just 10% better. The original moonshot culminated on 21st July 1969 when Apollo 11 landed on the moon and Neil Armstrong stepped out of the lunar lander. It all started 8 years earlier (25th May 1961) when US President John F. Kennedy delivered his “moonshot speech”, challenging the American people to put a man on the moon, and return him safely to Earth, by the end of the decade.


So the essence of a moonshot is a solving a huge problem. Moonshots may need a radical, even science-fiction-like solution. But in that case, there needs to some sense of a tangible solution that is just coming into view. It also needs to be well-defined.

In the tech world, Google epitomises moonshot thinking. Think StreetView, driverless cars, head-mounted displays, etc. StreetView is still one of my favorites and I count myself fortunate to have played a small part in the Australian chapter of that story. StreetView sounded pretty crazy at the time. “Let’s drive every road in the world (almost) and capture footage, then stitch it together and make it accessible to anyone with a web browser.” Today, we take it for granted but at the time it required solving some big technical problems.

Humanity faces big problems: protecting the environment, weaning ourselves off fossil fuels, producing enough food, making health care affordable, taking care of those less fortunate than us; the list goes on. These big problems can only be solved if we aim for transformative solutions. These are problems where incremental thinking simply won’t cut it.

It’s counter-intuitive, but making something 10x better can actually be easier than making it 10% better. If you’re just aiming for 10% better, you invariably end up using existing tools and assumptions and have to make progress through sheer effort. Whereas if you shoot for 10x, it forces you to change everything, start over, question all the assumptions, etc.

Our approach to the AusOcean rig, exemplifies this approach. By going back to the drawing board we designed a sea surface platform that is 10x cheaper than commercially available buoys. However our moonshot was not building a super cheap sea surface platform. AusOcean’s moonshot is for a global network of ocean platforms. We envision thousands and thousands of them around the world, enabling the world to perform ocean science on a scale unimaginable till now.  Perhaps "oceanshot" would be more appropriate though.

Of course we're still at the very begining of that journey.  Watch this space.
mission rig