This is the second in a series of reports by AusOcean summer interns.

Hi, my name is Frank, I was a volunteer intern for AusOcean over the summer. I study Mechatronics and Computer Science at the University of Adelaide.

I had a feeling that if I started at AusOcean I would be swept up by the passion, culture and tech fuelling the engine that drives toward a noble cause. This feeling soon became reality.

Throughout the summer period I was exposed to the widest array of software, hardware and processes imaginable. I started by first orienting myself around the language Go as it was the fundamental code basis at AusOcean. With this and a few additional software tools, I embarked on my first challenge, which was to reverse engineer the existing buffer to develop a new ring buffer for temporary storage of packetised video data. This task was motivated by the need to reduce data loss during times of unstable connection between a deployed rig and an onshore receiver. The new buffer would optimise memory use by not only recycling old elements, but also minimising redundant memory between each buffer element. The biggest challenge was to programmatically handle concurrency, where data could be read and written simultaneously. A feeling that has no parallel is that of seeing your code integrated into real-life technology. It was rewarding to know that the tiny but, crucial piece of code, I made was actually uploaded onto a small microcontroller, on a rig, floating in the ocean!

After assembling a few controller boards, I came to the conclusion that the process was tremendously tedious. I decided to design a custom PCB from scratch. This took me a few weeks to complete due to PCBs having multiple layers. This new PCB would drastically reduce assembly time and human error when soldering on components in the correct positions and orientations. There were a handful of team discussions to decide on layout, circuit protection, and future proofing the board for extra peripherals. The result was a marvel. 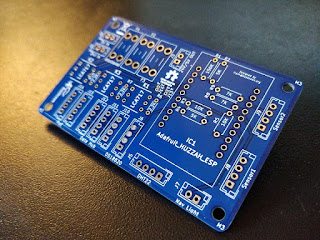 A highlight earlier in the summer, amongst many, was a diving trip to install a rig at Carrickalinga. Despite having the objective of testing a recently designed, more robust mooring system, I was more concerned about the wonderful creatures and vegetations I might see. I had just obtained my diving licence so you can see why I was so excited. The operation to install the rig was a big success and do I dare mention, I even had a close encounter with an adorable baby blue ringed octopus.

Some other tasks I was involved with were coding a serial interface for a Vemco shark tag detector, electrical and mechanical assembly of rigs, testing of point-to-point Wi-Fi over water, visits to PCC for the Network Blue program and utilising CAD to design a controller housing.

As important as it is, documentation is not a word that excites most young engineers. In between the programming and mechanical work on the rigs, myself and the other interns undertook the task of writing and re-writing cohesive manuals for component testing, assembly and part descriptions. This was in the hope of streamlining and standardising future processes. As this was no small task, a few weeks were dedicated to it.

Nearing the end of the summer internship period when I thought, surely, I have exhausted all cortices of my brain. I found myself researching underwater acoustics and refamiliarising myself on the basic principles sound attenuation. And I was not reluctant to do so! Afterall, it was all for the cause of researching the possibility of revitalising native oyster populations with relaying audio of healthy reefs. 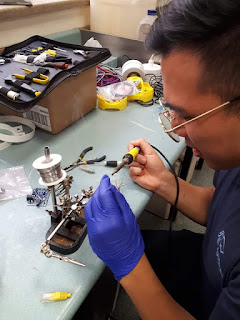 Waking up every day to work was effortless as there was always the anticipation of having exciting new experiences, whether it be wrangling with the struggles of Bitbucket version control or strapping yourself into a BCD ready to roll backward off a boat. I have cherished every moment learning and connecting with meaningful technology, the ocean and above all else, the talented and truly brilliant AusOcean crew! 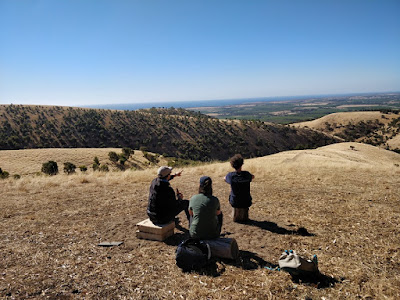