An affordable solution for underwater audio 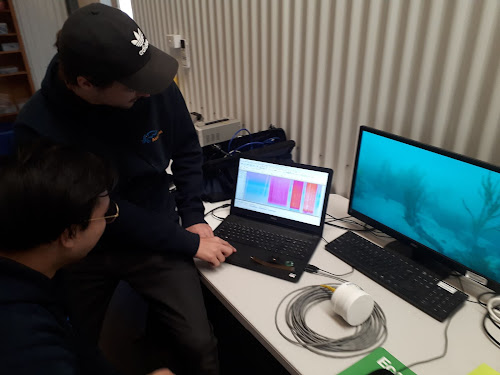 If you're a marine researcher, tech developer or just someone who has a curiosity for oceanic behaviours, you probably understand the numerous challenges that come with conducting underwater experiments. Clearly, water and electronics do not mix, especially with the impending corrosiveness of a salty solution. At AusOcean, we have developed a simple, yet affordable solution to combat this. Derived from earlier custom underwater equipment and through many iterations, we settled on a robust and reliable underwater speaker design. The ultimate objective was to achieve indefinite operation and modularity such that the speakers could be installed on any rig, at any location, for any length of time. One such usage for this technology is revitalising coastal marine ecosystems through artificial sound attraction of oyster larvae during recruitment periods. If you’re interested, our sound blog delves further into the science behind this phenomenon and explains how our tech is helping to answer some important ecological questions.
Low-cost speaker design
Ok, let’s ‘dive’ right into some design features of the underwater speaker. As there is a strong focus on producing simple and accessible designs, a combination of commercial off-the-shelf components and manual assembly processes was utilised. A side note, many components were selected on the basis that they could be substituted with equivalent alternatives that may be more available for other developers. 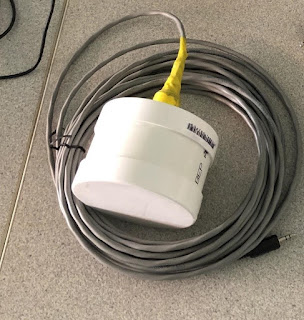 The outer speaker housing is simple. Just a couple of PVC caps permanently joint to both ends of a tube segment with PVC cement. These joints form a perfect seal that is suitable for 100 KPa of pressure, which is approximately 10 m below sea surface. The most vulnerable point in the housing is located at the opening for the audio cable due to the interaction of multiple non-rigid materials. The audio cable threads through a smaller conduit that is filled with JB weld, while aligned with a hole on the rear cap. This joint provides sufficient cable surface area for the JB weld to bond to, and the gummy texture acts to alleviate any bending and tugging stresses. An interesting fact, audio cables differ from standard power cables in that they are designed to introduce less electrical noise, which is crucial for both receiving and sending audio signals.
The surface transducer, also known as a vibration speaker, is glued onto the inside of the front cap within the watertight housing, safely away from sea critters. The transducer’s contact with the cap enables the entire speaker housing to become a surface for sound transmission. In other words, the PVC housing becomes the speaker. 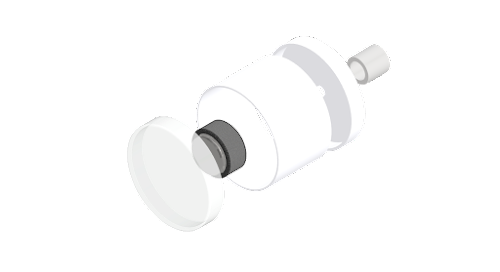 Electronics are snugly tucked away up the mast of a rig. The rig provides power, communication, and control to all onboard electronic devices. Any developer board with audio playback capabilities (i.e. a sound card) can be used. We chose the Raspberry Pi 3. It is uploaded with the latest audio file and package from AusOcean’s open source AV Git repository before integrated with voltage regulators and an amplifier. We used a stereo 20-Watt class-D audio amplifier to separate into two synchronised mono signals. Class-D amplifiers usually have around 90% power efficiency which is ideal for long-term marine applications. The looping audio file is a specially selected track that baby oysters can jam to. 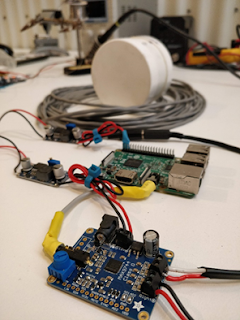 Performance & Testing
Of course, purely surface testing and datasheets were not sufficient for identifying the underwater speaker’s performance. It is probably safe to say that oyster larvae were not the primary target audience for these electronic manufacturers. Considering this, we conducted some of our own tests with professional hydrophones. We determined the maximum reach of the speaker’s audio was roughly 200m at a depth of 5m. Why ‘roughly’? Well, there’s a plethora of variables that would have impacted the test such as ambient noise, constructive/destructive sound reflection from the sea surface/floor, diffraction over a distance. Another interesting fact, sound attenuates differently in different mediums, such as water and air.

Future Applications
A future development for this compact speaker is to convert it into an interchangeable microphone-speaker by reversing and amplifying the incoming signal. Although the cheap speaker would most likely not perform well as a hydrophone, it can provide useful feedback for diagnosing any issues. For example, if there is no incoming noise signal then the speaker has either become waterlogged, buried, or disconnected. There are many more possibilities and potentials for this speaker design. For example, our larger variant Self-contained Underwater Speaker Unit (SCUSU) has been designed for deployments over larger spatial areas in partnership with researchers at The University of Adelaide.

Hope you enjoyed the read and found something discussion-worthy!
AusOcean is a not-for-profit ocean research organisation that supports open source practices. Open source approaches to tackling environmental issues means embracing collaborative tools and workflows which enables processes and progress to be fully transparent. A critical aspect of working open is sharing data not only with your immediate team but with others across the world who can learn, adapt and contribute to collective research. By contributing to, and supporting open practices within the scientific community, we can accelerate research and encourage transparency. All tech assembly guides can be found at https://www.ausocean.org/info.