The ocean without kelp is like a forest without trees 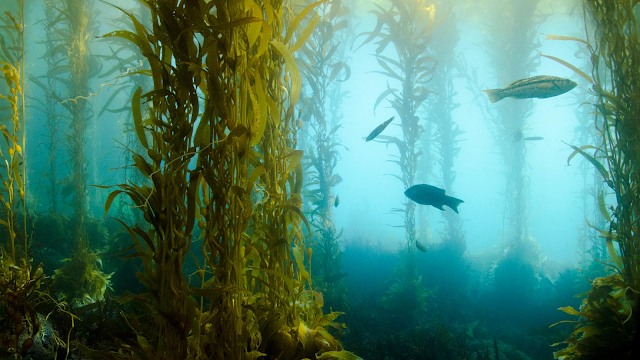 Beneath the waves another type of forest exists. Not dissimilar to trees on land, these forests form the basis of the food web providing habitat for thousands of fish and other marine life. Few experiences in the natural world are as spectacular as that of a healthy, vibrant, kelp forest, teeming with life, swaying back and forth in perfect harmony with the ocean’s ebb and flow.

Although they appear similar to plants, kelps are large brown algae seaweeds which make up the order Laminariales. Using "anchors" kelps grip to the seafloor, growing up towards the water's surface relying on sunlight for food and energy. Some species reach underwater heights of 30m, and in optimal conditions can grow 45cm in a single day.
Through photosynthesis kelps boost oxygen production while helping to protect shorelines from erosion by dampening ocean swell. By absorbing CO2 in the surrounding water, they make conditions less acidic and more favourable for many other marine organisms; the oceans best defence against ocean acidification.

Kelp forests have been likened to the “lungs” of the ocean due to their phenomenal carbon sequestration abilities. In Australia, they contribute more than 30% of total blue carbon stored and sequestered around the continent, and approximately 3% of the total global blue carbon on Earth. But that's not all, the use of kelp and macro algae for blue economy applications such as livestock feed, bio fuel and pharmaceuticals are continually being explored.

Kelp forests are a defining feature of the interconnected shallow rocky reef system spanning Australia's southern coastline known as the Great Southern Reef (GSR). This system is a hotspot for diversity and endemism with more than 1500 seaweed species calling this reef home. These forests form beautifully complex three dimensional habitats and play a key role in facilitating biodiversity. 85% of the species found here are found nowhere else in the world.

If you've dived or snorkelled anywhere along the GSR you'd be familiar with the beauty and marvel of these magical underwater forests. There is nothing quite like the sun bursting through the glistening gold and brown canopies as they sway effortlessly in the currents.
Like many regions of Australia and the world, South Australia's kelp forests are declining due to warming oceans, pollution and overgrazing. Vast underwater forests comprising the common kelp Ecklonia radiata once dominated the rocky reefs along Australia’s southern coastline. Under mounting pressures these productive systems are being replaced by algae turf barons. Once established, turfs dominate reef substrate and trap sediment, outcompeting other organisms. Kelp beds that remain are protected under the Environment Protection and Biodiversity Conservation Act 1999 (EPBC Act) as a threatened ecological community.
Multi-species Approach to Habitat Restoration
Since kelp forests are the foundations of Australia's temperate reef systems, investing in restoration efforts will have far reaching benefits both environmentally and economically. In South Australia, researchers at The University of Adelaide are exploring a multi-species approach to shellfish habitat restoration on Windara reef, the largest shellfish restoration project in the Southern Hemisphere.

Shellfish reefs dominated by the native Ostrea angasi flat oyster were once commonplace in South Australia’s gulfs and bays. These productive and biodiverse systems were destroyed through a combination of wild harvest, destructive fishing practices and water pollution. Windara reef located in the coastal waters of Gulf St Vincent is made up of 18,000 tonnes of locally sourced limestone which provides the initial foundations for reef regeneration. By replacing the hard substrate that once existed in the gulf, oyster populations can begin to reestablish and thrive, creating a productive and resilient habitat for marine life for generations to come.
Restoring shellfish reefs is a challenge, particularly in severely degraded systems where no natural reef substrate remains.  Restored limestone reefs at Windara are dominated by thick turfing algae which appears to be inhibiting oyster recruitment to the exposed surfaces of the reef. This dominance limits the capacity for oysters to recruit, grow and form complex three-dimensional reef habitat. This recruitment process is vital because shellfish reef ecosystems and efforts to restore them rely on the inlux and settlement of key reef building organisms such as oysters.

To tackle this issue, researchers transplanted both living kelp and synthetic kelp mimics to test whether they could boost recruitment of oysters by suppressing the growth of algae turf. The results indicate that transplanted kelp, whether living or synthetic kelp mimics, effectively reduced the biomass of turf and boosted oyster recruitment by up to 26 times.
Restoration programmes remain focused on single species, however, systems may respond more favourably under multi-species approaches. This research shows that novel techniques are required to achieve shellfish reef restoration outcomes. Where incorporation of natural kelp may be unfeasible, exploring novel alternatives such as synthetic mimics can provide a quick, small-scale alternative. By coupling low-cost environmental engineering solutions with innovative approaches to science, we can tackle conservation challenges and work towards a more healthy, vibrant and biodiverse marine environment for South Australia.
Following the successful construction of Windara reef, a second oyster reef has just been announced at Glenelg along Adelaide’s metropolitan coastline. An exciting time for shellfish restoration in South Australia.

AusOcean is a not-for-profit ocean research organisation that supports open source practices. Open source approaches to tackling environmental issues means embracing collaborative tools and workflows which enables processes and progress to be fully transparent. A critical aspect of working open is sharing data not only with your immediate team but with others across the world who can learn, adapt and contribute to collective research. By contributing to, and supporting open practices within the scientific community, we can accelerate research and encourage transparency. All tech assembly guides can be found at https://www.ausocean.org/info.
Follow us on Instagram, Facebook or Twitter for more photos, videos and stories.
Ardrossan conservation kelp Ostrea angasi oyster reef oysters seaweed shellfish restoration South Australia Windara Reef